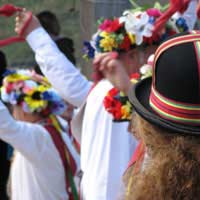 Morris dancing developed throughout the late fifteenth century derived from French and Spanish influences. The French Moresque and Spanish Morisca dances are said to be the main inspirations of the dance, and although its origins are widely debated, there is no denying its cultural importance as an English folk dance. Several regional styles emerged and were contained within specific geographical areas of England, each adopting a different variation of the dance. Dancers perform rhythmic stepping and choreographed figures, whilst often wielding handkerchiefs, sticks, or swords, and wear costumes decorated with ribbons and sometimes bells. It is associated with May Day, performed outdoors in celebration of the spring festival. Its lively, entertaining style has ensured a resurgence of the dance, honouring its rich cultural heritage. Although traditionally considered a men’s dance, these days both women and men pay homage to the traditions of Morris in its different styles. Whilst the different styles of Morris are recognised as belonging to certain regions of England, they are practiced all over the country, and even in countries as far away as Australia, Canada, the United States and Hong Kong.

Styles of the Morris

Cotswold- This style refers to dance variations from an area mostly in Gloucestershire and Oxfordshire. This style of Morris is mostly danced with handkerchiefs or sticks to embellish the hand movements.

North West-The North West tradition is very different, and has always featured mixed or female dancers, in this traditionally male dominated dance. They always wore clogs and the style was often referred to as a 'maze' or 'garland dance' as they involved a very intricate set of movements in which the dancers would weave in and out of each other. Many dances were performed with a hoop decorated with flowers which would have been held above the head.

Border-Developed in counties located in and around the English-Welsh border, this variation is a simple, loose, more vigorous style. Characteristics that developed in the nineteenth century and early twentieth centuries include use of a strip of bells, or costumes decorated with ribbons, strips of coloured cloth or paper. This variation emphasises stick dances, and tend to be an uncomplicated form.

Rapper or Short Sword Dancing- From County Durham and Northumberland. Dancers used short swords, and in both long and short sword styles, a soloist dances outside and around the set.

Molly Dancing- Molly is an East Anglian Morris, from Cambridgeshire and Essex. It is a more comedic version of Morris, dancers typically dress unceremoniously in work clothes, and one man – the Molly – dressed as a woman.

Fluffy- This term is coined from the frequent use of pom poms by women sides or troups, although not a traditional regional style.

Despite many variations to Morris dancing, there are certain features that link all the different traditions together. Often the dancers interact with the audience, particularly one of the dancers, sometimes known as the fool, who dances in and around the formations, and often incorporate mime into the performance for comical appeal. Bells, swords, clogs, elaborate or decorated costumes, blackened faces, flowers during spring, and musical accompaniment of drums or concertina are some of the distinguishing elements. Morris is not a competitive dance style, but performed for entertainment and celebration, in groups ranging from two to eight, involving choreographed partner routines, jigs and geometric patterns.

The History of Country Dancing
Share Your Story, Join the Discussion or Seek Advice..
[Add a Comment]
@Ru-B. Yes Carnival style morris dancing is competitive. Even traditional morris dancers still participate in competitions but more often than not they perform for show at fairs and festivals etc.
DanceTutors - 24-Oct-14 @ 10:00 AM
@Ru-B - yes the carnival style morris dancing is completely different traditional styles. There are still troups doing both kinds of dancing in the North west.
DanceTutors - 24-Oct-14 @ 9:58 AM
"Morris is not a competitive dance style". Actually, Carnivalor "Fluffy" Morris came into existence because of competitions held after the wars to revive Morris Dancing, and there are still many, many competitions held in the North West of England for Carnival Morris teams. I think it is danced more in competitions than it is displayed to the public, actually. In this respect it is unlike other styles of Morris dancing.
Ru_B - 21-Oct-14 @ 6:31 PM
I don't think it's true that North West sides traditionally "always wore clogs". "Fluffy" or "Carnival" Morris is a variation of the North West style and is still danced largely within the North West of England.
Ru_B - 21-Oct-14 @ 6:22 PM
Title:
(never shown)
Firstname:
(never shown)
Surname:
(never shown)
Email:
(never shown)
Nickname:
(shown)
Comment:
Validate: