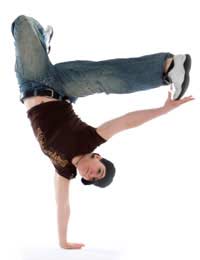 If you think break dancing went out in the ‘80s…think again. Breaking, also called b-boying or b-girling, is an intensely practiced and popular style of dance and has been since its origins in the 1970s. Along the way, it has taken on the complexities of the cultures it has impacted and has secured a permanent place in the pop-culture forum.

Kool DJ Herc, a Jamaican DJ working in New York City in the 1970s, is often credited with creating breaking, musically and culturally. It was he who first experimented with the stringing together of musical breaks in songs so that the dancers who battled in his club could carry on their solos for longer. By using two turntables, Kool Herc could re-cue the beats as many times as he wanted. He also coined the terms ‘b-boy’ and ‘b-girl’, which stood for ‘break boy’ and ‘break girl’. Dancers used these counts to show off their most impressive moves, often forming groups or crews which would battle one another. Soon, what began as a quest for the most dance proficiency became an alternative to aggression and violence. In many New York communities, particularly in Brooklyn and the Bronx, breaking became a method of solving conflict and earning respect.

Several different styles of movement comprise breaking techniques. Although it is a highly improvised form of dance, basic movements from its early days have remained within its vocabulary.

‘Top rockin’' was one of the earliest forms of breaking. This is any string movements done in the upright position. Inspired by tap, lindy and the footwork of James Brown, top rockin’ often serves as an introduction to the dance and a warm-up for the dancer before he or she attempts more acrobatic moves. Conversely, downrock is the footwork the dancer performs low to the ground. The basic downrock move is the 6 step, in which the breaker crosses and uncrosses the legs in a circular motion. In downrock, speed and intricacy are most important.

Power moves are those which usually require a great deal of strength and momentum to execute. The upper body, particularly the arms, shoulders and head, often carry most of the weight in power moves, including the flare, the swipe, the windmill and the butterfly kick. Many of the power moves in breaking are inspired by martial arts or gymnastics.

Freezes are an extremely important, though difficult, skill to master in breaking. In a freeze, the breaker suddenly halts all motion and strikes a physically impressive pose. More difficult freezes, such as the headstand or pike, require the dancer to invert balance or change direction quickly and strongly. Some breakers are known for their incredible ability to freeze in difficult positions, which can earn the dancer respect in battle and in performance.

Suicides are another visually impressive skill. They often come at the end of a series of movements, or the end of a routine. Opposite to a freeze, in which a dancer appears to have complete control, a suicide creates the illusion that the dancer has lost control of his or her body. They might fall onto their backs or stomachs, sometimes jolting to a particular beat or sound in the music. The more dangerous or painful a suicide appears to be the better – although, skilled dancers who perform suicides can do so without hurting themselves.

It is important to note that the terms preferred by most dancers and practitioners are ‘breaking’, ‘breakers’, and ‘b-boys/b-girls’. The term ‘break dancing’ is said to lack respect for the history of the dance and to cater to a media-marketed version of it.

Today, films, television, and even theatre have embraced breaking and its followers. Though many feel that the dance no longer plays the same significant role in inner-city communities, its popularisation has resulted in the spread of technique and appreciation world wide.