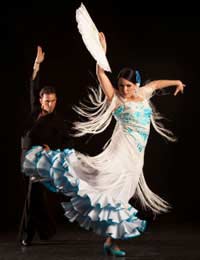 Can there be any image which sums up the passion and drama of Spain as well as the enduring image of the flamenco dancer? And what little girl has been on holiday to Spain and come home without a flamenco dancer doll? When it comes to iconic images, flamenco dancers are right up there with Beefeaters symbolising London and lederhosen-clad men an image of Germany. Yes, they are clichéd images, but they are also powerful and conjure up a whole world of associations with that country. But what exactly is flamenco and where did it come from?

The origins of flamenco are shrouded in mystery, so old is the dance. It is believed to have links going back as far as the Jews who lived in Spain even before the Moors arrived in 700. But the elements of the dance which were brought by the Jews and the Moors were just that – elements. The dance continued to evolve throughout history, and, when Spanish colonialists travelled to what is now Latin America, they found all sorts of dance traditions. Some of these elements were then brought back to Spain and fused with the existing styles, and flamenco as we know it today was formed.

Flamenco is a hugely different dance to any of the ballroom styles we are more familiar with in the UK. For a start, the traditional flamenco dancers do not have any formal training – they are self-taught. This means the dance continues to evolve and grow as it is passed on from generation to generation – although obviously, these days, there are written and videoed records of it as well. And the men and women who perform for a living are also professionally taught.

Where to See Flamenco

As many cultural devices are, flamenco these days is a huge tourist draw. People visiting Spain on holiday should not have any problem finding anywhere to see the dance. But traditionally, it is staged in three settings. The first, the juerga is the name given to a casual gathering where people get together to enjoy song and dance. Local stars come to the forefront and the dancing evolves depending on the characters involved. This is the most organic way of seeing the dance and the closest to its origins. The cantaor, the singer, is the mainstay of the performance – it is as much about him and his music as the dancing.

Flamenco can also be seen in concert, more likely for tourists. There will usually be a handful of guitarists as well as the dancers, and, of course, the cantaor. The third way to see flamenco is in a theatre which is more stage and elaborate than the other two ways of seeing the dance with the audience being treated to a story and a big stage spectacular.

Flamenco is a beautiful style of dance and there is much more that could be said about it. The costumes and the dresses worn by the women dancers exude beauty and sex appeal, and this is more than matched by the dark brooding of the male dancers and singers. Anyone visiting Spain should certainly attempt to go to a flamenco performance to see real Spanish heritage in action.