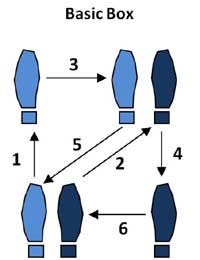 Like all types of dance, the rhumba explained is no easy task. As have many dances, especially those which fall into the Latin rather than ballroom classification, rhumba has evolved over time and across locations to become the dance that we know today. However, there are some characteristics which make it possible to define the rhumba and to explain what it is.

Where Did It Start?

Pinpointing exactly where the rhumba first began is not as easy and simplistic as one might imagine. Some dances, such as the tango, are defined by their country of origin. Less so the rhumba. Having said this, the rhumba is intrinsically linked with Cuba, and it could be fair to say that this is where it began. But the rhumba, which can also be spelt rumba, also has African and even Spanish roots. It is thought that the dance originated in Cuba through the traditions in dance of the African slaves who were brought to the country and then fused with those dances of the Spanish colonial powers at the time. It increased in popularity throughout the latter half of the last century and by the 1930s, it was the most popular dance in the country - and its fame had spread to other shores.

What Makes it Unique?

Although the rhumba started life as a freestyle type of dancing, it does now have characteristics which make certain types of movement the rhumba as opposed to any other kind of dance. The rhythm of a rhumba is always based on a five-stroke or beat pattern. People who have watched even just a small amount of dancing will also realise that the movement where the couple who are dancing meet at the navel and then pull away is also a movement which is ever present in the rhumba. The dance is seen as sensual and even raunchy at times, and will often be characterised by the wearing of flamboyant and sexy costumes.

The music which can be used for rhumba is wide and varied although traditionally will have featured some sort of percussion to count out that strong beat mentioned above. The dance, outside of a dance contest setting, is often performed in its native country as a dance of celebration and enjoyment, often complete with vocals as well. The name rhumba can also mean a type of music, originating in Spain, which obviously used to be used exclusively for the dance.

Although the rhumba can be a popular form of dance in competitions - and has recently been brought to prominence by certain TV shows, in its purest form, it is still often danced on the streets of Cuba, as a way for people to express themselves. It is a fixture at parties and fiestas and certainly seems like its enduring popularity shows no sign of abating just yet. It is a beautiful fusion of cultures which celebrates the diversity of people which make up the country of Cuba. And of course, like so many other Latin American dances, it exudes that lust for life which so many Westerners are desperate to capture.