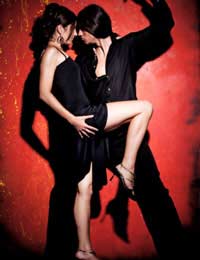 Even non-dancers are familiar with the tango dance - what it looks like, the music style it is danced to and the mournful air which surrounds it. In many ways, the tango is set apart from its Latin American cousins. While the salsas and the rhumbas are infused with fun, life and flamboyancy, the tango is an altogether more sensual and deep dance which carried with it a brooding air. Perhaps it is this sensuality which makes it one of the most popular dances worldwide.

That the tango started in Argentina almost does not need saying for most people. It did, however, spread throughout South America, and today, the Argentine tango is just one of many styles available, with others, such as the Uruguayan tango, also proving popular. The there is the ballroom tango, also known as the American tango - and even a Finnish tango.

But, going back to the origins of what we know as tango today. It was a dance which was fused from the traditions and customs of Spanish and Africans, and, like so many Latin dances, has roots in a slave culture, as some elements of it were brought over with slavery. It began life every much as a lower class dance and the theory goes that one of the reasons the partners in tango are pressed so closely against one another is that venues were often so crowded in those days that this was the only way to dance.

The lead and follow element of tango is one of the things which makes the dance so distinctive from others - with a particularly fierce lead and follow embrace. The milonga style of dance characterises this better than any other tango in existence. It has very small steps, intricate footwork and very close body and postures. As a general rule, the more upper class the tango style, the longer steps which are taken - but the smaller steps require much more precision and skill.

Although the tango can be traced back to the nightlife of Buenos Aires and Montevideo in the late nineteenth century, the dance really came into its own in the 1950s. It was at this time that clubs across South America started to play the kind of music which allowed these types of dances to be commonplace - and word about the tango began to spread to other countries, giving rise to the extraordinary number of tango styles we have today.

The tango is one of the most famous dances in the world. It has been the subject of innumerable films and songs. It has a wonderful romance to it, and all professional dancers want to be able to master a truly convincing tango. It is also a world heritage of humanity which reflects its importance to South America and how proud Argentina and Uruguay are of this dance which they are determined to preserve for generations to come. It means that the dance is as important to those countries' heritage as Stonehenge is to England or Chichen Itza to Mexico - something which this UNESCO status proves that the world recognises.