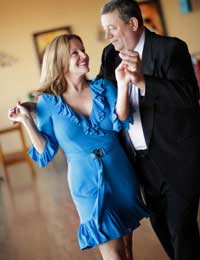 Quickstep is that instantly recognisable, stunningly intricate, full of complicated footwork dance that makes its dancers look like they have four feet each and not two. To the uninitiated, how anyone can manage such fast feats with their feet is unthinkable. It is a ballroom dance which is danced across the world, but to label it old-fashioned, slow or boring would be the rods of someone who had never seen a truly proficient quickstep dancer. For, when done properly, there is nothing like a quickstep for simply taking the breath of the onlooker away.

As the name suggests, this dance is no slouch and for that reason, it is probably best that it is not danced by anyone new to the world of ballroom dancing. The quickstep is the fastest in tempo of all the ballroom dances and it follows a 4/4 time beat. This moves at about 50 bars a minute. When you compare this to a dance like the waltz, it is very fast indeed.

The origins of the quickstep lie in its slightly more sedate cousin, the foxtrot. In the 1920s, all kinds of new dances were springing up across the world, and the influence of American dances such as the Charleston had reached British shores. The English dancing fraternity took it upon themselves to take some of the clever footwork from the foxtrot and mix it with the exuberant spirit of the Charleston to create a brand new dance which they named the Quickstep in 1927, when it became an official type of dance.

The speed of the footwork is the defining characteristic of the Quickstep but the dance has other unique traits which set it apart. It has come a long way from its initial steps. But, as with most ballroom dances, the couple who are dancing have to stay together - this presents plenty of problems in moving those feet in little, fast steps. The couple must be perfectly in time or disaster can ensue.

The dance developed to the jazzy sounds of the 1920s initially. However, these days, as with much ballroom music, people dance the Quickstep to anything which has the vital 4/4 beat. The beat is arguably more important in the Quickstep than any other type of dance. Today's Quickstep can also include music with split beats, with an 'and' in between beats. This allows for an extra step to be taken on these splits.

Quickstep is an excellent dance for beginners to aspire to. Few dances look as impressive or are as athletic. But beware, for Quickstep dancing is as energetic as any dance and rivals the Latin style of dances for how fit someone needs to be to do it well. But master the Quickstep and you will feel like your feet can do absolutely anything you ask.