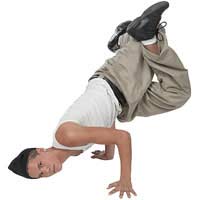 In today’s diverse and intercultural world when we hear rap music, see music videos, or watch dancers on-screen, it is easy to forget that hip hop dance and the larger hip hop culture has grown out of a history as rich and influential as that of any more traditional genre of dance or music.

Although unnamed at the time, hip hop began as a cultural movement in the ghettos of New York in the early 1970s. The term ‘hip hop’ was first used by underground MCs and DJs in the clubs, as they picked up on the rhythm of the music and shouted to the crowds to join in the dancing. However, it was DJ Afrika Bambaataa who used the term to describe the urban movement which was currently on the rise.

Hip hop traditionally refers to four main art forms: MC-ing, or rapping, DJ-ing, dancing and graffiti. Street dance or hip hop dance, as it exists today, stems from the innovative and varied movement styles which began to develop separately, but simultaneously, on the east and west coasts of America. In New York, ‘breaking’ and ‘uprocking’ emerged. Meanwhile, ‘popping’ and ‘locking’ came into being in Los Angeles.

In the 70s, the words ‘breakin’ and ‘rockin’ were used to describe something done with skill or enthusiasm. A ‘break’ was also the instrumental section of a song and it was during the break that dancers showed off their most impressive and energetic moves. Kool DJ Herc is credited as the first to use two turntables to extend these ‘breaks’ so that the dancing could last longer. Kool Herc also created the terms ‘b-boys’ and ‘b-girls’, which stood for ‘break boys’ and ‘break girls’. These terms are still the preferred names for men and women who break dance.

Breaking began with ‘top rockin'' or footwork that was done in an upright position. Top rockin’ is and was a creative and personal form of dance, but was influenced by tap, lindy hop, James Brown’s “good foot”, salsa, and various Latin and African dance styles. Soon, top rockin’ was supplemented by footwork and freezes on the ground. Inspired by martial arts films of the 70s and the Brazilian art of Capoera, floor rockin’ consisted of different ways to ‘drop’, as well as spins, footwork, and poses. The way in which dancers could transition between top rockin’ and floor rockin’, and the precision with which they could freeze their movements was an indication of their skill level.

Around the same time, Brooklyn, NY saw the birth of ‘Brooklyn uprocking’. Similar to the movements used by b-boys and b-girls, this dance was more confrontational and was used in battles between dancers. Brooklyn uprocking is identified by a repeated movement called ‘jerking’ and a witty style that responds to the lyrics and rhythm of the music, in an effort to outshine the opposing dancer.

While New York became the breeding ground for breaking and rocking, the music and dance scene in LA was infused with the energy of soul, R&B, and funk. Imitating a local dance form called ‘the funky chicken’, Don Campbell (also known as Don Cambellock), created ‘locking’. Campbell locked his joints at the end of a movement and this became his signature style. He formed a group called ‘The Lockers’ and together they established a dance form which combined elastic-quality movements with sharp freezes. The Lockers made many television appearances and gained national popularity in the U.S.

In 1976, Sam “Boogaloo Sam” Soloman formed The Electric Boogaloo Lockers in Fresno, California. However, Sam combined movements of Chubby Checker, James Brown, and animated cartoons to create his own unique style. Out of this style grew ‘popping’. Originally ‘popping’ was used to describe the contraction of an individual set of muscles to cause a sudden halt in the body’s movement. Eventually, though, popping became a blanket term for all of the fluid, unpredictable, and polished movements that the Boogaloos mastered.

As time passed, all four styles of hip hop spread and mixed. Different regions became noted for different styles and specialties. Eventually, hip hop music and dance gained so much popularity that it spread overseas and became an integral part of international pop culture. Most hip hop classes offered today combine elements of all four styles, along with influences from jazz and video dance.

The very act of performing hip hop before an audience is a departure from its origins as an improvised, collaborative, and often aggressive dance form. However, despite the fact that media and commercial influences often diminish the original intentions of hip hop, these outlets allow for a wider cross-section of dancers and artists to access the form as it grows and changes.