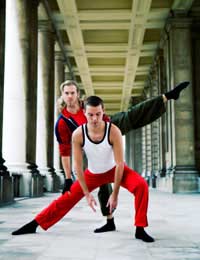 In the early 20th century the dance world saw the beginning of a revolution. The ironclad traditions of ballet and classical technique were shattered to make way for a new and innovative style of dance and movement. Modern dance would change the way dance could express emotion and influence trends in choreography on an international scale.

At the start of the 1900s, dancers and choreographers began looking beyond the rigidity of ballet in order to give their dancing a more expressive quality. Many of the most influential dancers of this period found ballet limiting, vulgar and a symbol of imperialism. They became interested instead in individuality, ritual, religion and the primitive.

The American dancer Isadora Duncan was influenced by ancient Greek sculpture, while Ruth St. Denis, along with the German dancer Mary Wingman, drew inspiration from Oriental and African dance. Duncan used her study of the Greeks and the theoretical work of Friedrich Nietzsche to develop a philosophy of dance that celebrated free movement and classified this pure form of dance as a kind of high art. Meanwhile, St. Denis, after touring Europe with Duncan and the burlesque dancer Loie Fuller, returned to the United States and started the Denishawn school and dance company with her husband, Ted Shawn.

Based in Los Angeles, the Denishawn School produced the next generation of innovative modern dancers. Its pupils included Doris Humphrey, Charles Weidman and Martha Graham. After training, Graham moved to New York to join the Greenwich Village Follies, while Humphrey and Weidman set up their own school and company. These dancers began developing their own methodologies and techniques for teaching and creating modern dance.

Another important dancer, Lester Horton, chose to continue to work in California, rather than New York and developed a style of modern dance that incorporated the whole body and combined elements from disciplines such as African dance and modern jazz.

Around 1927, newspapers began to hire dance critics and around this same time, universities began to accept modern dance into their curriculum, first as a form of physical education and then as an art form. It was official; this new movement was in full swing and modern dance was here to stay.

The Move to Contemporary

Although the early modern dancers drew on mythical and ancient inspiration for their school of movement, their pupils saw the potential power of dance here and now as a catalyst for social change. Driven by the tone set by the Great Depression in America and the fear of fascism in Europe, these dancers strove to dramatise the current state of their world, politically and emotionally.

Merce Cunningham, a former ballet student who danced with Graham, introduced postmodernism and the abstract to the 20th century dance cannon. Jose Limon, a student of Doris Humphrey, became one of the most influential modern dancers of his time and created his signature dance, ‘The Moor’s Pavane’.

Paul Taylor, who danced in the companies of Cunningham, Graham and George Balanchine went on to create his own company and became known for incorporating everyday gestures and modernism into his choreography. One of Taylor’s students was Twyla Tharp, who remains today one of the most influential choreographers of contemporary dance.

Important African American choreographers also began to emerge, including Alvin Ailey, who was a student of Lester Horton and Martha Graham and Katherine Dunham.

Although the rise of postmodern dance fought against some of those initial intentions of the early modern dancers, the contemporary dance technique generally taught in schools today takes inspiration from both the modern and postmodern movements. Existing more peacefully now alongside traditional ballet, contemporary dance has carved out its own history and future. It remains ever changing and continues to depict a reaction to the world and its uncertainty.