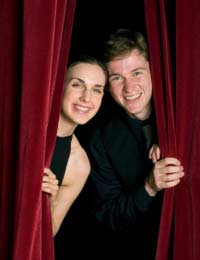 A guitarist needs a guitar, a pianist a piano. And just as a musician relies upon a musical instrument, so does the dancer utilize the instrument of his or her own body. However, it is not dancers alone who value their bodies as their primary creative tool. Actors, too, must use the body as their means of expression. As with dancers, actors use movement to tell a story, create an image, or add to a greater artistic whole. Although not all actors receive formal training in movement, those that do would argue that having different techniques and methodologies at one's disposal can deepen process of exploring a role and building a character.

At the most basic level, theatre and movement have always been linked. Whether it is a stride across the stage, the lifting of a prop, a facial expression, or an interaction with another person, all actors use their bodies as part of their craft. This is how characters are defined and personas created which are separate from the performer. Over time, schools, theorists, and instructors have developed a number of ways through which actors can learn to better understand, control, and use the body as an acting tool. Although these methods are as numerous as the actors that practice them, there are a few which have become an intrinsic part of many directing styles and actor training courses. Some of these include:

Developed by Rudolf Laban, one of the founders of European modern dance, the Laban technique is actually a system and language for understanding and defining movement. It is also sometimes known as 'Laban Movement Analysis'. Using what are called the 'effort qualities', Laban created diagrams and a system of notation (called Labanotation) which dancers, and in fact anyone, could use to describe and communicate a particular movement. In the Laban technique, every movement is defined in terms of its Weight (strong/light), Space (direct/indirect), and Time (quick/sustained), and Flow (bound/free) Laban also referred to and studied the space in which the body moves, or the Kinesphere.

Although it is often studied by dancers as well, Laban training is useful to actors in the way that it provides a common language. The language of Laban, when familiar to everyone in a rehearsal room, can be used to describe the essence of particular movements or two discuss the general movement vocabulary of a particular character. When studied by actors, Laban's effort qualities can often help to uncover the inner life of a character by way of his or her movements and physical attributes.

Alexander Technique attempts to re-educate students to move with the least amount of effort or tension possible. This method suggests that each of has built-in muscle memory which allows us to move with grace and poise, but that due to the industrial and technological ways of the world, our bodies may have lost some of that ability. Therefore, in the Alexander Technique, the actor must first become aware of his or her ingrained physical tendencies and then secondly, begin to learn how to break free of any extraneous effort and tension and discover how the body moves naturally. Slowly, students learn to free themselves of any 'inefficiencies' and are able to move more smoothly and easily. This newfound physical awareness his helpful to actors as it encourages the kind of exploration and question of one's own body that is required to shed one persona and take on another.

Meyerhold's Biomechanics technique uses intensive physical training to forge the link between mind and body. The learning process begins with simple physical activities, and then moves to activities which are more difficult and complex. Finally, the student is presented with some of Meyerhold's own choreography. The purpose of this is to work through the physical exertions and in doing so, gain an increased awareness of one's spatial relationship to the rest of the world and to other people. Slowly, though, students begin to deepen also their awareness of an inner life and their own existence from moment to moment. Meyerhold's technique gives the actor a physical means of understanding the basic Western methods of acting. That is, it provides an active way of experiencing thoughts and feelings as if for the first time and living in the present moment.

With all of these techniques, the idea is mainly that the training of the body helps to train the mind and heart as well. And leaving particular methods aside, it is the use of movement in theatre that allows a character to come through, bringing the world on stage to life.