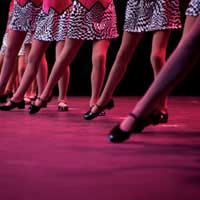 Anyone who has recently taken a seat in a West End or Broadway theatre can probably tell you that musical theatre dance is alive and well. But don't always expect the expected; a lot has changed over the years. For centuries, theatre and dance have been intrinsically linked as cooperative means of performance and expression. Within the realm of musical theatre though, these two art forms collide with even greater force, creating new possibilities for their impact upon pop culture and society. Just as the element of dance impresses itself upon theatre, so does the element of theatre affect the practice of dance and as such, musical theatre has become a jumping point for artists and dancers seeking new creative heights.

At the most basic level, musical theatre is comprised of three components: music, lyrics, and dialogue (also called the 'book'). Although the inclusion of dance is not required, movement is almost always part of the equation. Even in musicals that do not feature advanced choreography, the blocking and expressiveness of the actors bodies still helps to create the visual effect of the piece. In most cases, however, choreographed dance is employed in musical theatre to enhance the storytelling, adding entertainment value and spirit to a performance.

It is impossible to define 'musical theatre dance' as a single style of movement. This is because the kind of movement or dance employed in any piece of theatre reflects the style of that performance as a whole. As the musical theatre tradition descends from operettas as well as vaudeville and burlesque, the movement vocabulary used in a production can vary. It depends heavily upon the kinds of music used in the score, the style of the set and costumes (sometimes known as the 'mise-en-scene'), and the time and place in which the musical is set.

Traditionally, tap, classical jazz, or period dance have been associated with musical theatre. This is because these dance forms were well suited to the earliest musicals, which grew from song-and-dance revues. These shows focused less upon a coherent plot and more upon the ability of the performance to entertain and amuse. As a result, the dance numbers were mostly upbeat. This gave way to the musical comedy, arguably the most popular form of musical theatre, which remained upbeat and entertaining, though adhered to a more concrete storyline.

As musical theatre has progressed however, particularly since the late 20th century, new branches of musical theatre have given way to the incorporation of different dance forms. The phenomenon of the director/choreographer in the US made musical theatre dance a force to be reckoned with within the dance world at large. Innovative artists like Jerome Robbins ('West Side Story', 'On the Town', 'Fiddler on the Roof'), Bob Fosse ('Sweet Charity', 'Chicago', 'Cabaret'), and Susan Stroman ('Contact', 'The Producers') have turned musical theatre into a forum for showcasing edgy and exciting choreography. The same is true of hit-music productions, which have gained popularity in the last two decades. These musicals are based upon the music of pop artists and use songs that are already hits.

In order to keep things interesting, however, choreographers have been allowed to use this music as a blank canvas for storytelling. The rise of rock musicals (such as 'Hedwig and the Angry Inch', 'Rent', and 'Tommy') has also affected the role of the choreographer, giving productions a more 'freestyled' look and a stronger link to social dance. Meanwhile, Broadway and the West End has embraced dance-based musicals, such as Stroman's 'Contact' and the tap phenomenon 'Bring In Da' Noise, Bring In Da' Funk'. These productions make dance the main attraction, which means that these days, musical theatre choreography is apt to be more than a few toe taps and turns.

What has become clear over the years is that musical theatre dance, in all of its forms, utilizes dance traditions in exciting and accessible ways. By embracing the tone set by a writer, composer, or choreographer, these routines and performances illustrate the way dance can stretch across mediums, reaching a variety of audiences and expressing any number of ideas. Since theatre itself is tied up in the idea of performance and spectatorship, musical theatre dance becomes another language spoken between artist and audience. It emphasizes the effectiveness of movement in storytelling and character development while standing as a testament to the way in which dance can be simultaneously exploratory and entertaining.