Learning to Dance with Two Left Feet: A Case Study 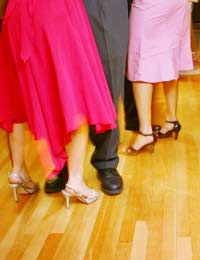 Most people would love to be able to dance but many fear they will not be able to master the steps. While it is true that not everyone can wow people on the dancefloor, most people can pick up the basics of dancing and, more importantly, gain plenty of enjoyment from the pastime. Here, Gary, who took up salsa dancing at the insistence of his wife, tells his story.

"My wife Jane decided that salsa dancing looked like fun. Lots of people near us were taking it up and there were plenty of classes at local community centres and pubs. Jane initially went with her friend Kay and they had a ball of a time. They would come back talking about how much fun they had had and what good exercise the dancing was. They didn't mind that they had to partner each other – the classes had far more women in them than men so lots of other people were in the same boat.

"But then Kay's husband John decided to take up salsa dancing and started going with the women. This meant that Jane had to partner strangers which she felt a little self conscious about. So she begged me to go along. But I was terrified. It wasn't just that I didn't fancy it, I knew I would be hopeless. I have always had two left feet and no co-ordination. I've never even been any good at football due to tripping over my own feet and I had been picked on at school because of it. I may have moved on and become a grown man, but that fear of being laughed at was deep-seated.

"Still, I went along with Jane after much persuasion because I could see how important it was to her. And, at first, I was hopeless. I was by far the worst in the group but, to my surprise, no one laughed at me. In fact, people were really encouraging. The less good dancers laughed at themselves as well and the better ones offered encouragement and tips to me. After a couple of weeks I started to improve. Even though I had no co-ordination, the fact that everyone was so helpful meant that I picked things up. And because it was in a fun, no pressure environment of a pub, I relaxed.

"After a few weeks, I was getting a lot of the moves and managing to dance with Jane without treading on her feet. More to the point, I was really enjoying myself. And the more I enjoyed it, the better I got. I started to go to a second class a week so I improved even more quickly. My two left feet ceased to be a problem. I'll never be the best dancer in the world, but I can manage basic salsa dances now. And what's more, I enjoy something I never thought I'd have the guts to take up. So give it a try – if I can dance, anyone can!"

Learning to Dance for Your Wedding

My Husband to Be Couldn't Dance: A Case Study

Organised Dancing at a Wedding Reception